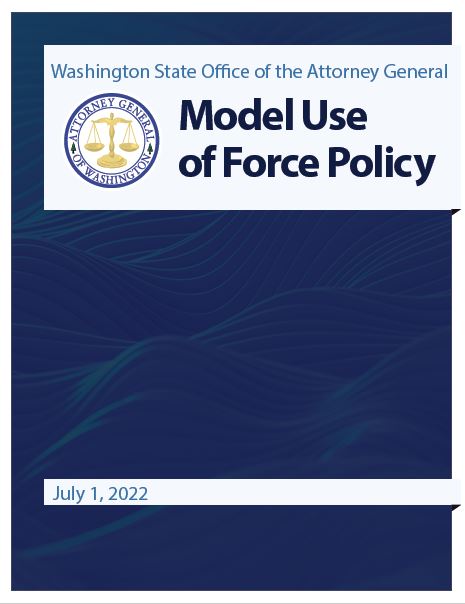 OLYMPIA — Today, the Washington Attorney General’s Office released a model use of force policy as a resource for Washington law enforcement agencies.

The legislature ordered the attorney general’s office to release the model policy by July 1. By December 1, law enforcement in Washington must either adopt a consistent model policy or adopt its own policy that meets the standards of the law.

The policy is intended to promote the safety of peace officers and the public by ensuring that officers exercise due diligence when determining whether to use physical or deadly force, and when they use this force. To this end, officers are required to use all available and appropriate de-escalation tactics before using physical force where possible, to use the least amount of physical force necessary to overcome resistance in the circumstances, and to put end to physical strength as soon as the need for it is over. In developing the policy, the Attorney General’s Office solicited, received, and used input from state and local law enforcement officials and leaders, the Criminal Justice Training Commission, and a large group of community organizations from across the state.

“This model policy is an important resource for law enforcement agencies,” Ferguson said. “Officers do a difficult and important job: helping to keep the public safe. The excessive use of force erodes community trust and reduces community security. Adoption of this policy, and subsequent compliance with this policy, will assist officers in preserving and protecting human life and upholding the dignity of every person in our state.

In 2021, the Legislative Assembly passed several bills dealing with the use of force by officers, including House Bill 1310. A provision of that law required the Attorney General’s office to develop model use-of-force policies by July 1, 2022. By December 1, agencies must adopt the model policy or a policy consistent with the policy. template, or provide a notice to the Office of the Attorney General stating the reason for any deviation from the template policy and an explanation of how the agency’s policies comply with HB 1310.

By Dec. 31, the attorney general’s office must publish on its website whether agencies have adopted use-of-force policies consistent with the model policy, or whether they have deviated from the model policies, and the reasons for leaving. . The website should also include copies of agency policies.

In accordance with the legislative directive, the model use of force policy applies to all peace officers in Washington, but does not apply to corrections officers – except those who work in the community – or other employees of prisons, correctional or detention facilities.

The policy covers considerations governing the use of force, including critical decision-making, de-escalation, reasonable care and first aid, among others. It also covers chokeholds, certain force tools, such as tasers, and certain restraints, such as shackles and pin guards.

The duration of the Model Policy is consistent with the City of Seattle Policy, as well as the New Jersey Attorney General’s Use of Force Policy.

In addition, the Attorney General’s Office assembled an internal team of attorneys and an investigator to provide input and review the model policy, including those with expertise in criminal justice, civil rights, mental health, protection of vulnerable adults and child protection. The team included those who previously served as law enforcement officers, as well as those who currently advise law enforcement in Washington. The Attorney General’s Office has asked former Pierce County Superior Court Judge Frank E. Cuthbertson to join its internal review panel as a special assistant attorney general.

The attorney general asked for input from every law enforcement agency in Washington, with several agencies of different sizes and from different geographies providing their insights. In addition, the Attorney General’s office solicited and received contributions from dozens of community and civil rights organizations, law enforcement associations, and tribal governments. The AGO released draft model policies on May 23 and invited public comment. The project generated considerable interest and the AGO recorded over 1,000 comments.

The Washington Attorney General serves the people and the state of Washington. As the largest law firm in the state, the Attorney General’s Office provides legal representation to every state agency, board, and commission in Washington. In addition, the Board serves the public directly by enforcing consumer protection, civil rights and environmental protection laws. The Bureau also prosecutes elder abuse, Medicaid fraud, and handles sexually violent predator cases in 38 of Washington’s 39 counties. Visit www.atg.wa.gov to learn more.