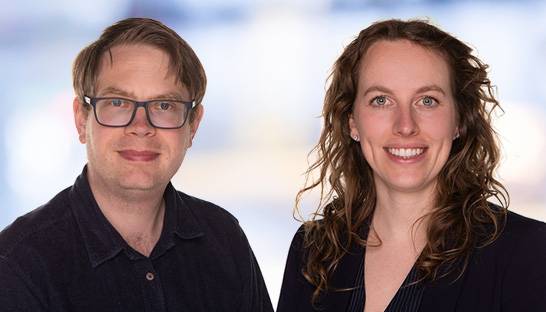 Two colleagues from Valcon on their promotion and career

During its mid-year promotion cycle, the Dutch wing of Valcon promoted more than twenty consultants to the senior level. Two of the lucky graduates – Herman Stehouwer and Mirte Freriks – share their journey within the company so far and their ambitions for the future.

Herman Stehouwer joined Valcon six years ago and has now become a senior director within the company’s data capability. He works as an internal customer representative, model builder, and leader of a project focused on applying language processing in documentation.

Meanwhile, Mirte Freriks started her career at Valcon about two years ago and was promoted to Senior Consultant within the company’s business process capability. After working as a business analyst at a utility company, she recently started as a project manager at a new utility client.

What is the most difficult project you have worked on?

Herman: “We carried out a chatbot project in an insurance company for which the chatbot had to go into production very quickly, despite resistance within the organization. Especially resistance and time pressure made it difficult because on the one hand you don’t want to upset the employees, while on the other hand you want to satisfy the customer.

“Additionally, another challenge could be found in the many adjustments and requirements of the chatbot. Eventually, we managed to put the chatbot into production in three months.

Mirte: “When I started at Valcon, I started a project for a utility company. Even though we didn’t plan to work on this project for long, I ended up staying here for two years and working on several back-to-back projects in the meantime. The hardest part for me was to dive deep into the content and, at the same time, keep an overview and coordinate the project.

“Additionally, the projects had many tight deadlines that we had to meet, which was also challenging.”

What gives you the most energy at Valcon?

Mirte: “In the projects I work on, I like to find out what is happening at a detailed level and focus on possible solutions to existing problems. I also enjoy guiding and helping others achieve this, which I have been able to do over the past year.

Herman: “The variety of activities, in which I have the opportunity to support young colleagues, I have a lot of contact with the customer and I am able to demonstrate specific cases and products to enthuse the customer. I also enjoy the combination of producing, implementing and integrating AI into existing organizations. »

What are your ambitions for the coming year?

Herman: “I would like to put at least two synthesis projects into production with my client. This will benefit the customer, because automatic language processing has a great impact and allows direct interaction with call center employees. On a personal level, I have set myself the goal of finishing my synthesizer this year.

Mirte: “I look forward to succeeding in my role as project manager with my new client. What I appreciate in this role is that I am involved in the management of the project from start to finish.

Productivity data: this is how lawyers work