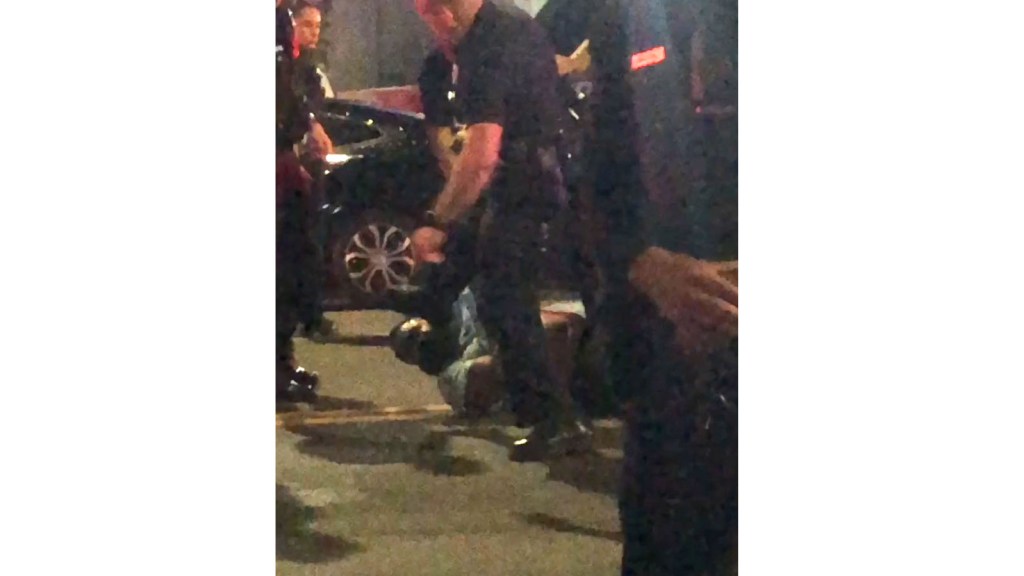 The Los Angeles Police Department is investigating a use-of-force incident over a holiday weekend captured on cellphone video that appears to show an officer kicking a handcuffed black man tied to the head during a meeting on a busy Hollywood street.

A Westminster woman who asked to be identified only as Camilla because she fears reprisal filmed part of the incident on Sunday July 3 in the 1600 block of Cahuenga Boulevard. On Friday, she provided the Southern California News Group with an eight-minute copy of that crude video.

“You see things like this on TV, but when you see it live and in front of you, it’s heartbreaking because there’s nothing you can do to help,” Camilla said.

The incident began around 7:15 p.m. when police responded to a report from a battery suspect at a marijuana dispensary.

“During the suspect’s custody, there were several separate use-of-force incidents,” LAPD spokesman Constable Drake Madison said in a statement. “At one point another man became involved when he tried to free the initial suspect from the police. There was a use of force with this suspect as well. All uses of force with suspects have been reported as required.

Madison said a bystander provided cellphone video of part of the incident “showing what may have been an officer’s boot hitting the suspect’s head.”

“This incident is being reported as a use of force and the department is following proper protocol and investigating it,” the statement said.

The LAPD did not identify the male officer or say whether he was on leave. Additionally, the department did not name the suspect or disclose any potential charges he may face.

In 2021, there were 2,261 incidents in which LAPD officers used force, compared to 2,201 in 2020, according to the department. So far this year, statistics on the use of force were not immediately available.

Fallen on the hustle

Camilla said she stumbled across the Hollywood incident. She was driving with friends to a human rights vigil on Sunset Boulevard when the group suddenly heard a cacophony of police sirens.

“It wasn’t far from where we were going and we were curious if it had anything to do with the vigil,” Camilla said.

The group parked and walked for several minutes before stopping where the sirens had been heard. There they found a parked ambulance, the street blocked by numerous police cruisers and more than 20 spectators lined up on the sidewalks, Camilla said.

His video begins with more than half a dozen LAPD officers gathered around a marked police vehicle. Around 90 seconds later, officers can be seen pulling the burly bearded suspect out of the back seat of the car, dropping him onto the street and struggling to apply leg restraints.

The man appeared to resist and appeared to yell at the officers, but it’s unclear from the video what exactly he said.

At 3:11 minutes into the video, an officer tries unsuccessfully to pull the suspect from the street, then plants his right foot in the man’s face.

The crowd watching the incident unfold erupts. “What was that (expletive), man?” a spectator can be heard asking aloud. “What’s wrong with you?” »

After about seven minutes, police finally managed to hoist the man into the back of the patrol vehicle.

Camilla said she went to the LAPD’s Hollywood-area station on Tuesday to ask for a badge number to identify the officer who kicked the suspect but was turned away. However, she said she was pleased to have kept the incident on video.

“People need to see what’s going on,” Camilla said. “It happened on a busy street and in front of a lot of people. It makes you wonder what’s going on in the alleys and dark corners. The public demanded accountability.”